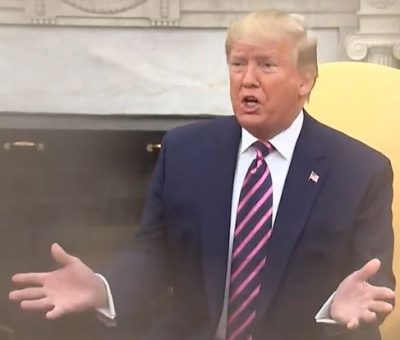 Endless hours of debate;
GOP loves me; Dems hate.
Impeachment now is one step closer.
Does this make me happy? No, sir.

Louie Gohmert, with a lame pout,
Read the whistle-blower’s name out.
And Jim Jordan, quite the sleuth,
Said Article 1 ignores truth.

Andy Biggs caused a disruption
When he said, “Trump hates corruption!”
Ranking member Douglas Collins
Kept on with his hoot-and-hollerin’.

Once both articles were passed, I
Said that I’d been long harassed by
Nervous Nancy – she’s a liar.
Ousting me is her desire.

Do you know what I just realized?
Impeachment here is being trivialized.
Emergency’s the only reason –
False alarm should equal treason.

Still, these articles were passed.
Full House vote is next to last,
Then the Senate’s turn to try me –
Mitch McConnell’s job to stymie.