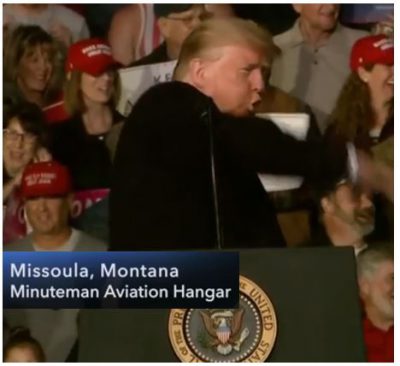 Kavanaugh and caravan – the top half of this midterm’s pillars.
(Let’s not talk about the Saudi prince, since he may be a killer.)
What’s the other two? Of course: they’re common sense, and law and order.
(I love how Greg Gianforte body-slammed that punk reporter.)

I will send the military, in a move that’s autocratic —
Gotta stop that caravan, since all those folks vote Democratic.
Allies of that party, I’ve heard said, are all behind the influx.
Is that really true? Perhaps it is; if not, I don’t give two fucks.

Coming soon: Election Day, and I am flying ‘round the country
Ginning up the base by sowing fear and also stating bluntly
Democrats are evil; it’s like handing matches to a firebug.
Only reason to vote Dem is all this winning you’re now tired of.

I’m not on the ballot, but these midterms really are about me.
You’d be broke, or overrun by immigrants, or dead without me.
If you vote Republican, then endlessly I will extol you.
If you’re a minority, we’re taking steps to unenroll you.