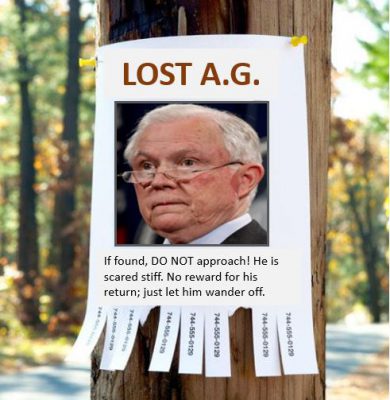 Have you seen this man? He’s M.I.A.
He’s five-foot-four, with hair of grey.
Has glasses perched upon his nose.
His job performance I oppose.

Endorsed me early when I ran:
I think it was his master plan
To be part of my Cabinet.
But keep him on? Not havin’ it.

I thought I’d picked my own Roy Cohn,
A fixer of my very own.
Instead, I find him very weak –
So let me offer my critique:

I think that Session’s a disgrace,
And I have said that to his face.
I mock him endlessly on Twitter
In hopes that he’ll become a quitter.

I want a man who’s got my back,
Looks out for me – but he’s a hack.
I would have searched for someone else
If I knew he’d recuse himself.

He’s subject to my endless rants.
(I think I made him poop his pants.)
I’ve impugned the man’s probity;
To me, he’s now a nobody.

And in my latest online riff
I said the man had been scared stiff.
He needs to shut this Witch Hunt down
Or I will chase him out of town.

So, how much longer can this man
Keep hiding, with head stuck in sand?
I know if I ask he’ll decline
To get rid of Rod Rosenstein.

Now, if you find him – please be gentle,
And drop him at a nearby kennel.
Perhaps if I don’t come around
They’ll have no choice but put him down.

Problem solved (at least for me),
And then I’ll name a new A.G.
Someone with grit (at least an ounce) will
Finally fire the Special Counsel.