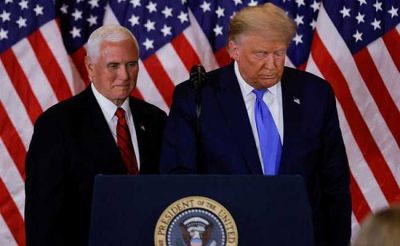 Pence is a pussy; I knew he would cave
(I spent four years teaching him how to behave).
There’s no way that he would invoke Twenty-Fifth.
To think he’d consider it’s merely a myth.

Oh, sure – he refused to reverse the election,
which made it all his fault: last week’s insurrection.
His lack of support for me means he’s a RINO
(support for his hanging I mean to imply no).

And now, for the second time, I face impeachment;
once more it’s a hoax. Since the Capitol breach went
a little too far, now they’re saying it’s my fault:
that I riled the crowd up, and too softly cried, “Halt!”

But back to Mike Pence – he sent Nancy a letter
that said, with so few days left, he thought it better
than play what he wrote were “political games,”
and said that the Bible supported his claims.

Reluctantly I’ll thank Mike Pence, whose sagacity
has sidestepped the question of my incapacity.
To be impeached twice transcends merely reproachful.
The odds I’ll last one more week? Mixed – but I’m hopeful.