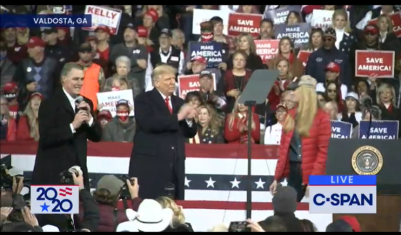 If I lost, I would say it – in tones you’d find gracious.
I’d give Joe a tour of the White House (it’s spacious),
I’d act toward his wife in a manner flirtatious,
dismiss all this talk about fraud as fallacious.

But I didn’t lose this; I won – by a lot,
‘cause there’s no way to stop the Trump Train juggernaut.
And because the vote outcome was not what I sought,
let’s throw out mail-in votes, and in courts have this fought.

I support Kelly Loeffler, and also Perdue.
Though this just-past election was stolen from you,
in this runoff I’m sure the results will be true –
just as long as they win, with both Dems bid adieu.

Now, down here in Georgia it’s kind of ironic
that mail-in votes this time I offer as tonic,
dismissing the problems I once claimed were chronic –
and now I promote them. It’s oxymoronic.

The reason I chose to appear in Valdosta?
A wayward attempt to prove I’m still the boss,
a continued attempt to have your ballot squashed,
a reminder of yet one more line that I’ve crossed.