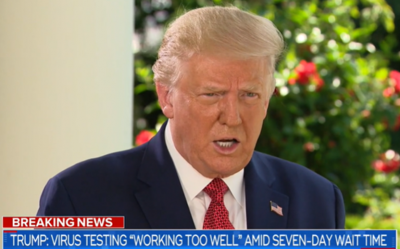 A reporter has asked me a question – just terrible –
about law enforcement death rates. Not comparable;
there’s more people killed by the cops who are white.
And yet Blacks are three times more likely, despite.

I said the Confederate flag, very simply,
is loved, not to be put away or hung limply.
There’s people who like it and don’t think of slavery,
so therefore its heritage can’t be unsavory.

I heard Dr. Fauci once say, “Don’t wear masks.”
But he’s changed his mind now, in case anyone asks.
All I will say is let’s follow the guidelines.
But set an example? I’ll stay on the sidelines.

Our country is doing by far the most testing.
I like Doctor Fauci, but I’m just suggesting
he’s made some mistakes, whereas I never blunder.
(Don’t think for one sec I’ll let him steal my thunder.)

Children and parents are dying from trauma
because schools are closed. You see, we’ve undergone a
big setback that I blame on what I’ve called “kung flu.”
No way due to not enough testing among you.

You’ll see me in interviews, Rose Garden rallies;
claim we’ve reached new peaks while still stuck in valleys.
Will I wear a mask again? So I have said:
might as well be a paper bag over my head.