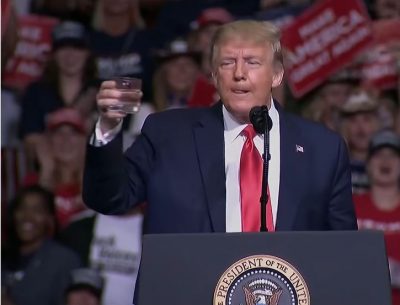 I came to Tulsa locked and loaded,
Rally heavily promoted.
Requests made for a million tickets.
Inside the arena – crickets.

Looks like teens and K-Pop fans
Got online, where they’d workshopped plans
To render my campaign a quick shock,
Using something known as “TikTok.”

No one in the overflow zone.
My team said that there were no known
Reasons for the skimpy turnout –
Other than, perhaps, Trump burnout.

Undeterred, I took the stage:
A vintage demo of my rage.
By now, I’ve broken all the old rules;
My new target? Leather-soled shoes.

I railed about West Point at length,
And then, to demonstrate my strength,
I quaffed a drink one-handedly
(Surprised myself, quite candidly).

An hour-plus, I think, I spoke.
I even tried to make a joke
About coronavirus testing:
“Slow it down, please!” (I was jesting.)

Called coronavirus “kung flu”
For the xenophobes among you.
Made light of the virus’s impact, it
Turns out six of my campaign staff contracted it.

Just 6,000 through the check-in;
This assembly far from fecund.
I’m no longer neck and neck in
This election – I’ll place second.