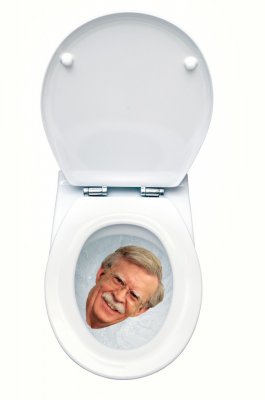 John Bolton begged me for a job; I felt so sorry for him.
I said, “I’ll find a role for you” when others said, “Ignore him.”
I guess I have a soft spot. Yes – I’m sadder now, but wiser:
Don’t hire a hawk as National Security Advisor.

He couldn’t get approved as the Ambassador, U.N. –
I’m certainly aware now what I wish that I knew then.
He didn’t last until his second annual review,
And now he wrote a book that is both nasty and untrue.

No sooner had I hired him than he had the bright idea
To go on television and insult all North Korea.
The model used in Libya to de-nuke: good for Pyongyang –
That made it clear his time with me would not be a prolonged hang.

If I had not dismissed him, we would be in World War Six
(With World Wars Three and Four and Five all thrown into the mix).
He made mistakes of judgment; as a neo-con, he’s preachy.
And now he wants to testify to help the Dems impeach me.

It looks like Mitch McConnell and the GOP won’t call him,
And over on Fox News his former comrades all have mauled him.
This trial should wrap up quickly: an acquittal, I am hopin’.
Unless, of course, John shares all that he knows – out in the open.