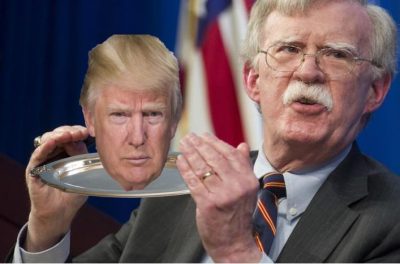 John Bolton wrote a book. Now – I would like to make it clear,
And so here is what I have to say (perhaps I will repeat it):
He’s mad at me since I took steps to upend his career.
I NEVER (here’s where I’ll restate) – I NEVER plan to read it.

The transcripts of my calls are all the proof that’s really needed:
Zelenskyy and his Minister said there was never pressure.
It matters not that Bolton was among my staff who pleaded
That, as the Constitution goes, I needed a refresher.

John Bolton, you’ll remember, had a public termination:
He claimed that he resigned, whereas I said that I had fired him.
And so perhaps revenge then led to this book’s germination.
Fox News already dissed the man (forgetting they once hired him).

I never told John Bolton what the news says he has written:
I’d hold the aid until Ukraine launched probes into my rival.
John feasted at my trough, yet now it’s my hand that gets bitten.
If he comes in to testify, so much for my survival.

My legal team had just begun to make their presentation:
On Saturday they kept it short; they barely took two hours.
Today they said their focus is on facts, not speculation.
Redemption’s on the side of truth – too bad that side’s not ours.