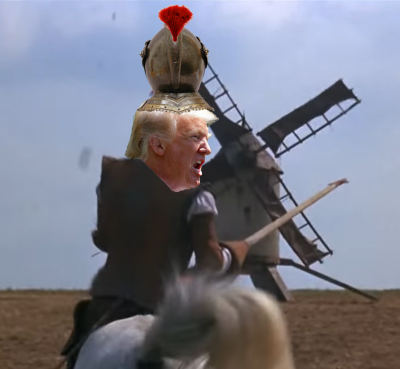 What is the wind? I’m not sure where it comes from.
I know it’s expensive, but here’s the conundrum:
The wind’s made of air, yet – of course – air is free.
And nobody’s studied wind better than me.

There’s two kinds of air: there’s the hot and the cold kind.
When blended together: more kick than a coal mine.
The wind’s carbon footprint is less than petroleum,
With energy flowing from blades that are slowly spun.

But here’s what I just read in… shoot – I forgot where:
Those claims of efficiency? All full of hot air.
They spew fumes and gases when they’re manufactured,
And those spinning blades have been known to attack birds.

If you kill a bald eagle: jail. Bet you’ll never guess
The step taken when windmills render them featherless:
They turn the blades off so they’re not as enticing.
Those poor birds, all victims of sad fly-by slicing.

Compared to the universe, our world is tiny.
(Well, everything’s small – when compared to my heinie.)
Tremendous amounts of pollution they’re spewing.
And when those blades stop, so’s your TV set viewing.

I’ve also been known to say windmills cause cancer.
If reindeer flew into them, Dasher and Dancer
And Comet and Cupid – all to our profound grief –
Would be decimated and turned into ground beef.

Windmills, it’s clear, get me bothered and hot and
They quite nearly screwed up my golf course in Scotland.
Expansion of windmills I’ll work to inhibit, or
I risk losing fossil fuel campaign contributors.