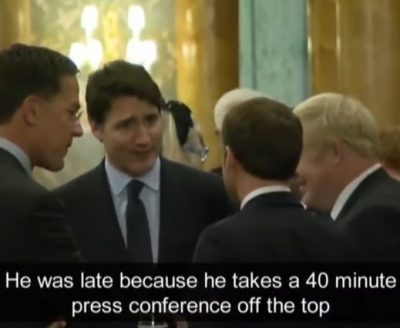 Things here at home are not going so great, so
I flew off to Europe to agitate NATO.
Some fact-checking done by Macron, head of France,
Who referred to the flames now consuming my pants.

Manny, my ex-friend, I found very nasty.
I didn’t pull punches, although in times past we
Both seemed to have brotherly romances going.
But now my antipathy toward France is showing.

I should have been gracious with Canada’s Justin,
But I made some comments that set off combustion
By calling Canadians “slightly delinquent.”
(If you read the papers, you know where the ink went.)

The head of the U.K. tried hard to ignore me,
Since most of the Brits both despise and abhor me.
I met with the Queen, since I’d already planned to,
But claimed I did not know her bad boy, Prince Andrew.

And then – several world leaders, sipping libations,
(According to lip-readers’ interpretations),
Appeared in a video, roiling with mirth
As they made fun of ME! Greatest Leader on Earth!

It’s quite clear that I don’t enjoy being ridiculed,
Lampooned, derided, made sport of, belittled, fooled.
The gang leader: Trudeau, so I called him “two-faced.”
My feelings were hurt; I left soon, with undue haste.

The future of NATO, already precarious,
Is shaky, since I didn’t find it hilarious
To have these compadres make fun of my past acts.
Next year, at G7? Guess who has the last laugh…