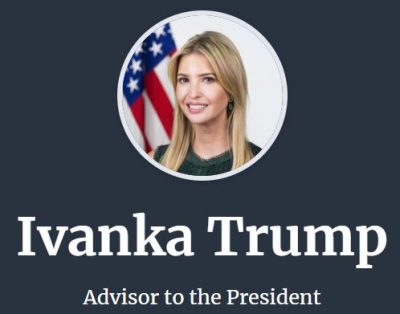 I took my little girl to work with me, as daddies sometimes do.
I brought her with me to G20, and to North Korea, too.
She wore her little power suit and tried to mingle with the grownups –
Then I took her out for ice cream and she also had some doughnuts.

It was cute to watch her say, “Hi!” to Lagarde, the foreign chieftain,
Who responded with a side-eye, as if children should be eaten,
While Melania stayed home, to watch her little baby brother
(And I’ve also got Don Junior, Eric, and… shoot – there’s one other).

Later on she met with Chairman Kim and said it was surreal, so
I claimed this trip was successful – but I didn’t make a deal, though.
I stepped into North Korea and she also made her way there;
Then I teased her and said, “Hurry up – or else you’ll have to stay there!”

As we flew home on the big jet that you little people pay for
She said, “What a great vacation! Wish we could have stayed one day more.”
But I had to rush her home so she could sleep in her own bedroom –
Unlike all those migrant children. Hope no more will be found dead soon.