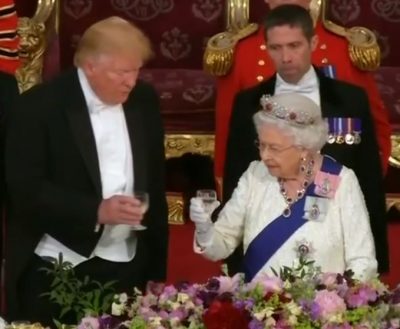 Invited for state visit means I’m a player.
While landing in London – I insult their mayor.
The two of us have exchanged words in the past. He
Is terrible. Also, I think Meghan’s nasty.

If asked, I will tell you I’m thinking about what,
Though protocol says I should keep my big mouth shut.
On this trip, I weighed in regarding next PM
And then resumed tweeting while having a BM.

I said any mention of protests was Fake News.
Theresa May – lame duck, so there won’t be breakthroughs.
I really admire Boris Johnson and his wit:
As far as my thinking goes, he is the shiznit.

Our two countries – long a relationship special;
We complement each just like mortar and pestle.
And yet – if the UK can’t “Brexit” the EU
I’ll screw them on trade; that I can guarantee you.

The Queen is a sweetie, although she is ancient.
Her husband, the Prince, is a frequent in-patient.
I had tea with Charles and Camilla, whose winking
Suggested to some: “What a wanker…” her thinking.

While visiting, I spent time with Nigel Farage
Since immigrants both of us like to disparage.
I turned down a meeting with Jeremy Corbyn –
Aligned with, he’s someone I’ve never before been.

We’ll wait and see if this trip helps restore luster
To being the POTUS, which I with my bluster
And constant attacks on foes, real and imagined,
Cause each nightly newscast to say, “Well, THAT happened.”