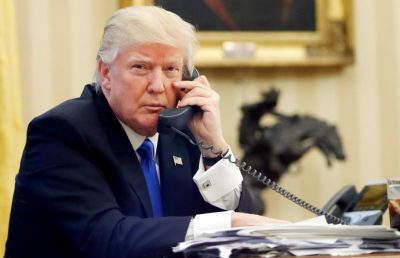 I had a call with Putin and we chatted for awhile;
I couldn’t see his face but in his voice could hear a smile.
I mentioned that the “Russian hoax” had now been put to bed.
I told him, “Pence says, ‘Hi!” He said, “The same from Medvedev.”

When Putin said, “A mountain –” (I’ll refer to the dictation)
“– that ended up a mouse.” Hmm… something’s lost in the translation.
I think what he was trying to say, as I now reminisce,
Those allegations of collusion now can be dismissed.

I did not broach the threat of any future interference,
Despite the warnings I’ve received about its reappearance.
He’s told me “Nyet!” before; denied intrusion systematic,
So I still take him at his word. (He’s so damn charismatic!)

We spoke of Venezuela: “No involvement” he assured me.
I said I thought Maduro, truth be told, could quite the turd be.
Despite what Mike Pompeo said, and Bolton said the same thing,
I took Vlad at his word and didn’t get into the blame thing.

My ears perked up when Vladimir made mention of a “three-way” –
A bummer: he meant China and some nuclear arms leeway.
He said that my approach to North Korea could be better,
But I bet Kim Jong-un has never sent him a love letter.

The Kremlin said our call was “businesslike,” also “constructive.”
But that was just PR doing its thing; being reductive.
Nobody understands our close relationship except me,
And clearly once again right off my feet this man has swept me.