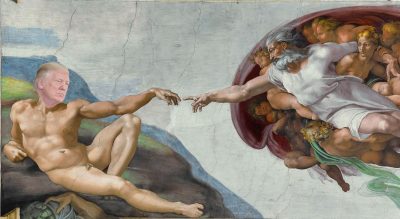 Hello, folks – God here. I thought perhaps I’d speak to you directly.
It’s My understanding Sarah Sanders made some news for you.
I chose Donald Trump to be your leader, if I heard correctly.
Well, let Me just weigh in on that allegation: Yes, it’s true!

Politics is one arena where I rarely choose to dabble;
Mostly I stay focused on the outcome of the Super Bowl.
But in 2016 I looked down and witnessed quite a rabble.
What I saw and heard upset Me; shook Me to My very soul.

Those stuck in the middle class (you know – the ones who go to church)
Felt, while others prospered, that their wages had grown ever stagnant.
The “One Percent” loomed ever higher on their wealthy hedge-fund perch,
Whereas the middle-income people barely got a tiny fragment.

The influx of new immigrants, some claimed, had gotten overwhelming.
Couldn’t tell the good from bad into your country you were letting.
Donald Trump proclaimed, “I’ll stir the pot that once was known as ‘melting’.
Build a wall to keep all out, while I will make ‘extreme’ our vetting.”

Gut the healthcare system and start over; decimate Obama’s
Over-reaching effort to require everybody purchase
Medical insurance, just in case of catastrophic trauma.
Tear it down – and from the ashes something better soon emerges.

Guns, which are protected, often used as weapons in mass killings.
Should there be restrictions on what can be purchased by the killer?
Flesh, perhaps, is weak for change – and spirits also are not willing.
Thoughts and prayers are offered (prayer is something with which I’m familiar).

I could ramble further, but you get My point: things were chaotic.
Time for Me to step in and exert a little of My magic.
Turn this all around? A quest so often thought of as quixotic,
But – if nothing’s done – the future of your nation looked quite tragic.

Therefore, I anointed Donald Trump to bring home all the bacon.
He would be your President – a mean and petty chief Commander.
Why would I do this? A drastic measure, so that I’d awaken
Something deep within you to remember: Love’s the only answer.

Many claim they’re acting as I’ve told them to, so what’s another?
Sarah Sanders claims she knows what God would want? I say, “F(orget) her.”
Now that you’ve seen one extreme, I think you’re ready for the other:
I have faith in 2020 all of you will do much better.