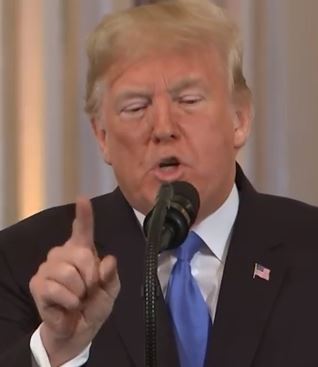 I’ve stated very clearly my belief we’d be at war
With North Korea now – if not for Kim’s and my rapport.
He wrote me lovely letters, laced with scent of his cologne,
And I was certain he’d de-nuke and leave us all alone.

Imagine my surprise, then, that there’s 13 new locations
Where North Korea may have missles – not good for relations.
I can’t believe that Chairman Kim’s behavior is this fickle;
It seems as though his promises are not worth one plug nickel.

I wonder if there’s other things I’ve been told that aren’t true.
I’d hate to think I’ve been misled, and may have lied to you.
I’ve pledged to always tell the truth, or words closely resembling.
To find out that I’ve failed at this… Gee whiz, it leaves me trembling.

Perhaps that caravan of migrants doesn’t pose a threat.
Or maybe my approval ratings – not the greatest yet.
Repealing and replacing ACA? We might think twice.
And saying Maxine Waters has a low IQ? Not nice.

I thought a forced family separation was appropriate.
Recommend death sentences for those scum selling opiate.
Believed a ban on Muslims would ensure we’re safe from harm,
And tariffs would protect most every soybean-growing farm.

I wonder now if global warming really is a thing,
Contributing to California’s deadly fire upswing.
It’s possible that recent tweets were really out of turn,
Wherein I blamed their governor for letting forests burn.

And should I wait ‘til votes are in to see who was elected,
Instead of claiming all those ballots massively infected?
Once I defeated Hillary, perhaps I should have given a
More gracious comment, like McSally offered Kyrsten Sinema.

Instead of placing billionaires in all roles in my Cabinet,
I could have screened for excellence and made sure they were havin’ it.
My choice for V.P. – Mike Pence – whose religion is fanatic,
Conceivably could have been filled by someone less dogmatic.

Looking back, my message that America comes first
May have led to good will with our allies now dispersed.
Insults hurled at Trudeau, Macron and Angela Merkel
Left me high and dry and outside of their inner circle.

Rather than proclaiming that the free press is all fake,
I’ll respect the institution; give those scribes a break.
Won’t call questions “stupid” or hurl insults at their faces –
Recognize a place for all, and let all have their places.

Looking at the midterm outcomes, I could hatch a plan:
Dial down the rhetoric and become a better man.
Send a message of inclusion; wish opponents well.
Likelihood that it will happen? Snowball’s chance in hell.