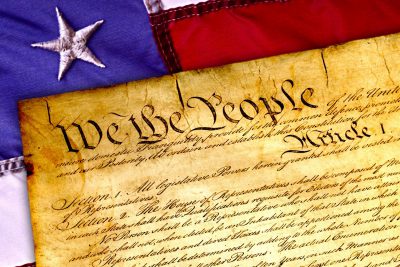 Focus of my campaign: make our country again great.
It will be – once the Constitution’s changed; it’s second-rate.
I’d like to make some changes, mostly to amendment Fourteen.
No question it’s ridiculous, like nothing I’ve before seen.

Conferring rights of citizens to foreign “anchor babies”
Will lead to an invasion with no ifs, ands, buts or maybes.
And while I’m at it, several other changes I will seek,
So here’s a working list of what is broken I will tweak:

I’m no fan of the First one, since it gives newspapers freedom:
Deliver false and Fake News to the (few) people who read ‘em.
Let’s get rid of the Fifth: it’s only used when people plead,
Pretending that they’re innocent and just want to mislead.

The Sixth one is supposed to make a trial a quick endeavor,
Yet I’ve been waiting on this Russia probe, it seems, forever.
The Seventh is another one: a jury trial’s for losers.
I’d rather settle out of court and pay off my accusers.

There’s one that I am fond of, I believe it’s number Twelve.
It means direct results of voting – something I can shelve.
And speak of voting: Fifteen has been written way too broad.
We’ve got to be alert for (non-existent) voter fraud.

Twenty-Five: another for which I have no affection;
Some thought that they would use it to extinguish my election.
Of course there’s that amendment to which I won’t sanction one change:
It’s good ol’ Number Two – so worry not; head for the gun range.

There’s lots of other articles, amendments, and some clauses.
I trash them in my stump speech so I know where the applause is.
Noted legal scholars have explained chapter and verse to me
(Never mind they graduated from Trump University).