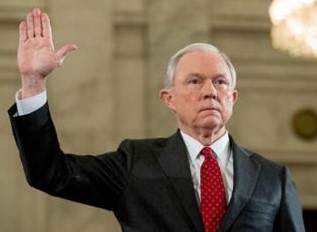 I had an Attorney General, but now no longer do.
And if he doesn’t turn up soon, I’ll give the job to you.
Don’t even have to come from Ivy League; just stand behind me.
And thick skin’s necessary, since I’ll speak of you unkindly.

As long as you are not confused; your brain does not get mixed up –
Then let’s go on a date or two; see if we should be fixed up.
The last guy’s nomination process surely was mishandled,
And since Day One he’s done a lousy job. It’s quite a scandal.

It’s said I’ve mocked his accent and derided his intelligence,
And blasted his recusal from the Russia probe – no relevance.
We’ll have to see what happens since I guess I study history.
He did quite poorly during confirmation; why? A mystery.

Since he endorsed me early on, for A.G.’s role I chose him.
But even my worst enemies now say I should oppose him.
It’s possible I’ll fire him, but not before the midterms.
And certainly he’ll get the boot on my, and not on his, terms.

I’m not happy at the border and with lots of other stuff.
It’s not just that recusal, though it would have been enough.
He wanted this job badly – and that’s just how he’s performed.
If he was planning to recuse, I should have been informed!

I never should have thrown my lot in with this Southern cracker,
Regardless whether he was first from Senate as my backer.
I’m not sure who’d replace him; several names have floated recently:
But sure to stand their ground when asked, “Have you no sense of decency?”