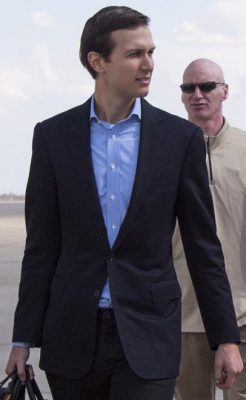 My security clearance has now been restored – I’m all the way back to “Top Secret.”
I can view all the briefings and info I want, and no longer must I try to sneak it.
This also suggests that I don’t have to worry a criminal probe’s underway,
So now I can get back to dealing with problems my father-in-law throws my way.

The Middle East conflict I recently fixed, when we finally relo’d our embassy.
The news reports filled with staged riots and turmoil – so do not believe all of them you see.
I’m also the head of a government office about “innovation” – that’s sweet!
But so far, our charter has largely been crafting the POTUS’s most recent tweet.

Along with the counselor Kellyanne Conway, we’re tackling the crisis with opioids.
We’ve traveled the country and held many meetings and nothing accomplished – all hope devoid.
The only solution she’s offered so far is to load up on French fries and ice cream.
The President thinks execution’s the answer. He brushed me off when I said, “Pipe dream.”

What else? Oh, of course – I am focused on prison reform like a solid-state laser.
I’m hoping that soon we’re prepared to announce we’ve developed a more humane taser.
We’ve got to keep folks out of prison for crimes where the punishment seemingly doesn’t fit.
But maybe our effort to give Joe Arpaio a pre-emptive pardon just wasn’t it.

And then there’s discussions with Mexico, China, the Muslims – I serve to liaise.
I’ve got so much going on under my watch; it sure seems like I’m due a wee raise.
My father-in-law puts his trust in me – so much, it makes other staffers so jelly.
But I plan to leverage those feelings of rage, as I scheme to get rid of John Kelly.